Dabigatran versus Warfarin in Patients with Atrial Fibrillation

BACKGROUND: Warfarin reduces the risk of stroke in patients with atrial fibrillation but increases the risk of hemorrhage and is difficult to use. Dabigatran is a new oral direct thrombin inhibitor.
METHODS: In this noninferiority trial, we randomly assigned 18,113 patients who had atrial fibrillation and a risk of stroke to receive, in a blinded fashion, fixed doses of dabigatran--110 mg or 150 mg twice daily--or, in an unblinded fashion, adjusted-dose warfarin. The median duration of the follow-up period was 2.0 years. The primary outcome was stroke or systemic embolism.
RESULTS: Rates of the primary outcome were 1.69% per year in the warfarin group, as compared with 1.53% per year in the group that received 110 mg of dabigatran (relative risk with dabigatran, 0.91; 95% confidence interval [CI], 0.74 to 1.11; P<0.001 p="0.003)" p="0.31)." p="0.13)" p="0.051)."> 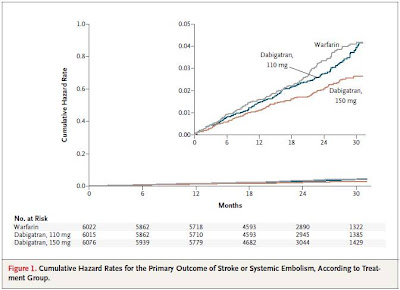